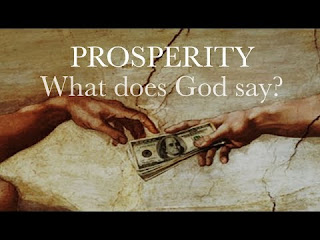 From The Gospel Coalition blog . . . .
Every so often when discussing the prosperity gospel, I hear proponents say, “But surely God doesn’t want us to be poor, does he?” This is viewed as a trump card, as if there’s no middle ground between obscene wealth and abject poverty.
People who say such things ignore the many Bible passages addressing wealth. They choose to forget the words of the wise man who prays:
Two things I ask of you; deny them not to me before I die: Remove far from me falsehood and lying; give me neither poverty nor riches; feed me with the food that is needful for me, lest I be full and deny you and say, “Who is the LORD?” or lest I be poor and steal and profane the name of my God. (Prov. 30:7–9)
They also choose to ignore the many biblical passages warning against the detrimental effects of wealth—and especially love for wealth. You don’t hear prosperity preachers mention such verses. It’s as if their Bibles are missing them.

Jesus has plenty to say about the dangers of wealth. In the Sermon on the Mount, he teaches:
Do not lay up for yourselves treasures on earth, where moth and rust destroy and where thieves break in and steal, but lay up for yourselves treasures in heaven, where neither moth nor rust destroys and where thieves do not break in and steal. For where your treasure is, there your heart will be also. . . . No one can serve two masters, for either he will hate the one and love the other, or he will be devoted to the one and despise the other. You cannot serve both God and money. (Matt. 6:19–24)
In Mark 10:17–25 Jesus deals with a rich young ruler who wants eternal life—so long as he isn’t asked to sacrifice his great wealth. When Jesus tells him to sell all he has and give it to the poor, he’s disheartened. He goes away sorrowful, for he has great possessions.
Jesus goes on to make the unequivocal statement, “How difficult it will be for those who have wealth to enter the kingdom of God! It is easier for a camel to go through the eye of a needle than for a rich person to enter the kingdom of God.” You don’t hear these words from prosperity gospel preachers. Rather, they give the impression that material wealth is the sure sign all is well between your soul and God.
On another occasion, someone in the crowd says, “Teacher, tell my brother to divide the inheritance with me.” Jesus refuses. This should surprise not only preachers of the prosperity gospel but also advocates of the social gospel. Jesus warns the one asking for this favor: “Take care, and be on your guard against all covetousness, for one’s life does not consist in the abundance of his possessions” (Luke 12:13–15). Material wealth is not blessedness.
And Jesus cements this warning with a parable:
The land of a rich man produced plentifully, and he thought to himself, “What shall I do, for I have nowhere to store my crops?” And he said, “I will do this: I will tear down my barns and build larger ones, and there I will store all my grain and my goods. And I will say to my soul, ‘Soul, you have ample goods laid up for many years; relax, eat, drink, be merry.’” But God said to him, “Fool! This night your soul is required of you, and the things you have prepared, whose will they be?” So is the one who lays up treasure for himself and is not rich toward God. (Luke 12:16–21)
According to Jesus, wealth can be accumulated by ignoring opportunities to invest in God’s kingdom. Such wealth is really poverty.

The apostle Paul also says things prosperity preachers would like to ignore. He warns Timothy against people who are “depraved in mind and deprived of the truth, [who imagine] godliness is a means of gain” (1 Tim. 6:5). I can’t think of a better description of prosperity gospel preachers. They’re depraved in mind and view godliness as a means to one thing—wealth. Since they’re not chiefly interested in the salvation of souls, they have lost the content of the true gospel. All they seem to want is money.
By contrast, Paul advocates for a modest financial position: “But godliness with contentment is great gain, for we brought nothing into the world, and we cannot take anything out of the world. But if we have food and clothing, with these we will be content” (1 Tim. 6:6–8). This is what I say to those who think that, by opposing prosperity gospel preachers, I’m advocating poverty. Why go from one extreme to another when there’s a perfectly biblical middle ground?
Paul also warns against an insatiable thirst for wealth:
But those who desire to be rich fall into temptation, into a snare, into many senseless and harmful desires that plunge people into ruin and destruction. For the love of money is a root of all kinds of evils. It is through this craving that some have wandered away from the faith and pierced themselves with many pangs. But as for you, O man of God, flee these things. (1 Tim. 6:9–11)
The writer of Hebrews sums up this counsel: “Keep your life free from love of money, and be content with what you have, for he has said, ‘I will never leave you nor forsake you’” (Heb. 13:5). Nothing can be clearer than that, but it’s the exact opposite of what prosperity gospel preachers say. Though wealth is not inherently bad, Scripture insists we harm our souls when we chase after it. As Jesus simply put it, “You cannot serve both God and money” (Matt 6:24).

Judging from their silence, I have little doubt prosperity preachers wish these passages didn’t exist. They fly in the face of their teachings. Prosperity preachers prefer verses that address holistic prosperity—and torture them until they mean material prosperity. This is not faithfully handling God’s Word.
Don’t get me wrong. We should praise God for Christians who have good jobs resulting in large bank accounts. We should ask God to give them wisdom to use their wealth for his glory. But we shouldn’t envy them, because with riches come many sorrows. Let us pray that God will give us neither poverty nor riches. It’s a less hazardous load to carry in this fallen world.
Editors’ note: TGC International Outreach is working to provide 100,000 free gospel-centered resources for English-speaking African church leaders through its Theological Famine Relief initiative. Learn more and consider making a donation to this important project. The first $25,000 will be matched dollar for dollar.
A version of this article appeared at Letter from Kabwata.