Eight Key Components for Multiplying Disciples in the Local Church

Ran across these necessary components pastors need to establish the DNA for multiplying disciples in their church.  Worth thinking about for any church leadership team.

A disciple-making pastor has a vision to disciple every person in his church, a determination to make it happen, and a system for sustaining it.  ~ Patrick Morley.

Do you have a vision for making disciples in your context, the determination to make it happen, and a system to sustain it?
Posted by AK Pastor Blog at 11:33 AM No comments:

Book Review: How to Gow: Applying the Gospel to all of Your Life by Darryl Dash

I think most American pastors recognize that people showing up to church is not effective discipleship and struggle with how to effectively disciple those who attend their church.  Darry Dash is a seasoned pastor who understands that struggle and had the opportunity to develop a process for discipleship from the ground up while planting a church.  How to Grow: Applying the Gospel to All of Your Life is the fruit of that activity, a helpful book on the gospel and gospel growth.  In this review, I will give a brief summary of each chapter and offer my observations at the end. 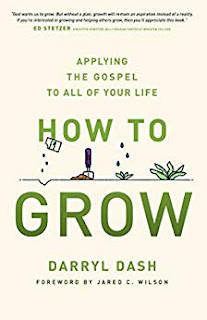 The author starts out in chapter one by defining the gospel.  After a lengthy summary of the bible’s storyline, he summarizes the gospel with three simple truths: God is holy, humanity is sinful, and God is rescuing both his people and his creation through the work of Jesus Christ.  He then describes several implications for our lives.
In chapter two, Dash considers spiritual growth, stating that we are designed for growth with the desire to grow that comes with believing the gospel.  He sees growth in a holistic sense, the gospel touching and spurring growth in every area of life.  Contending that spiritual growth is neither just self-help or amassing more information, but rather a radically grace driven transformation process, the restoring of the image of God in us as we are freed from sinful habits and desires.
Chapter three addresses the often ignored role of desires or affections in spiritual growth, particularly joy.  Joy is not optional or secondary.  It is central to the christian life, finding our greatest delight in God.  Our pursuit of joy is our pursuit of God’s glory.
Dash then looks at the stages of spiritual growth in chapter four, offering a growth pathway to spiritual maturity he has developed.  It was refreshing to see that one of those stages is making disciples or mentoring others.
In chapter five, while readily acknowledging the complexity of spiritual growth, this veteran pastor challenges Christians to master three basics as the basis for spiritual growth: knowing God, worshipping God, and obeying God.  He concludes the chapter by laying out the case for community being indispensable for spiritual growth.
The author expands upon the role of habits for spiritual growth in chapter six.  He starts by addressing inadequate ways of pursuing growth through learning more, making bigger goals, and sheer willpower then gives a practical discussion on the role of habits in spiritual growth that puts us in the path of God’s grace.  This includes how they are formed and the necessity of creating good habits for spiritual growth.  This chapter is worth the price of the book.
Chapter seven builds upon the three basics described in chapter five as the core habits for spiritual growth, bible reading, prayer, and worshipping with a church community.  The author gives sage advice on cultivating bible reading, prayer life, and involvement in a church community.
In chapter eight, Dash builds upon three core habits with six more supporting practices or habits.  These include the Sabbath, giving generously, serving others, sharing the gospel, caring for your health, and developing a rule of life.  For the unfamiliar, a rule of life is a guiding set of principles for your life to help you not only define but also live a productive, fulfilling, and God centered life.  I found his discussion on giving and sharing the gospel especially full of practical wisdom.  And his section on sharing the gospel centers around hospitality as a means of living on mission with the testimony of Rosaria Butterfield.
In the last chapter, the author challenges all Christians to engage in making disciples.  He argues that God calls all ordinary Christians to make disciples.
The book ends with three appendixes.  The first is a good list of recommended resources for growth.  The second is a guide on developing a rule of life as discussed in chapter eight.  The third appendix encourages pastors and church leaders to develop a culture for discipleship by being intentional about making disciples in the local church.  Lastly, the author shares briefly about his ministry, Gospel for Life, as a resource for that process.  If something he wrote piqued your interest, I recommend scouring the bibliography for additional reading!
As a pastor reworking our church’s own process for making disciples, How to Grow is helpful.  The author gives a theological foundation, often missing in books on spiritual growth and discipleship.  Yet he is also very practical.  Chapter summaries highlight the key points made, questions for reflection or discussion, and then suggestions for making application.  This book would be a good option for a discipleship group.
I will close with one minor concern.  The author recommends that those who identify as Christians but have no active or vital relationship with God to not settle for a such a nominal faith.  This seems to contradict chapter two where he argues that we are designed to grow and that faith creates desires within us.  It is possible that someone in this predicament may profess faith but not really possess faith (i.e. Mat 7:21-23; James 2:14-26).
You can get the book on Amazon.
Posted by AK Pastor Blog at 1:19 PM No comments:

Rethinking the Building of Community 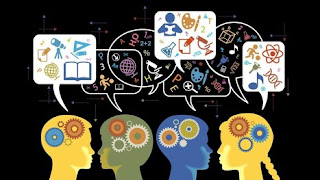 From churchandculture.com . . .
They would rather communicate with their friends online than in person.
They don’t want to learn in groups.
They want to navigate life on their own and, if they need help, they want to get it when it is convenient for them. And through their phone.
All this and more come from numerous studies of late conducted on Generation Z, the most recent being from the nonprofit Common Sense Media. It’s a fast-changing landscape to monitor. For example, the percentage of young people who said their favorite way to talk to friends is face-to-face declined from 49% to 32% in just six years. As co-author and lead researcher of the Common Sense Media project Vicky Rideout mused: “You can’t help but say, ‘Is there something big going on here?’ – some fundamental shift in the way people will be communicating with each other in the future.”
The communication revolution is, to my thinking, self-evident. What is less discussed is the community revolution it reflects, and what that means for those of us invested in fostering community.
Quick: How do you build community in your church if people – particularly young people – don’t want to be in a small group and would rather interact with people online?
If you’re like most leaders, you’re at a bit of a loss. Which is why it’s time to rethink community. Not rethink its biblical dynamics, which are the established target on the wall, but rethink how best to lead people into biblical community. Particularly in terms of starting points.
Let me see if I can stretch your thinking a bit. Right now, there’s a group of apps that are exploding in popularity with Generation Z that allow a form of community and “hanging out” that has never been provided before. For example, the app Houseparty. It allows video chat with up to seven of your friends. When a couple of people open it and start chatting, a push alert that they’re “in the house” is sent to everyone they’re connected with. Soon, the room fills up. Such experiences have been made possible by the availability of video chat in messaging apps like Kik and Facebook Messenger, as well as standalone apps like Fam, Tribe, Airtime, ooVoo and Houseparty.
It’s been called “live chilling.”
Some are even calling it the new “third place.” Do you remember that phrase? There used to be only two places where you could engage community or take up social residence—your home and your work. A third place in the U.K. was always the local pub. In the U.S., Starbucks and other coffee shops became the “third place.” But now, apps like Houseparty are becoming the preferred third place.
Boomers went to their friend’s house after school or, as an adult, to a small group in a home. Generation X would call their friends on the phone after school. Millennials used AOL Instant Messenger and later text messaging to keep up with their friends. Generation Z is back to having a house party.
Only it’s through their phone.
Could that be a starting point for entrance to and experience of community? I don’t know why not. There would be two mistakes to make with our changing culture. One would be to insist on having all entrance and starting points reflect the end game of, say, discipleship or community. The opposite error would be to drop the target on the wall and lower our standards in such areas. Both would be mistakes. Instead, we need to keep the biblical target on the wall for such things as authentic community but innovate in terms of how best to stair-step them into it. Because you will have to stair-step them into it.
And who knows? If we do, perhaps the house party will lead to an even newer third place.
The vision of the new community inherent within the church.
James Emery
Sources
Betsy Morris, “Most Teens Prefer to Chat Online, Rather Than in Person,” The Wall Street Journal, September 10, 2018, read online.
Laura Pappano, “The iGen Shift: Colleges Are Changing to Reach the Next Generation,” The New York Times, August 2, 2018, read online.
“Beyond Millennials: The Next Generation of Learners,” Pearson, August 2018, read online.
Emily Drooby, “For Generation Z, ‘Live Chilling’ Replaces Hanging Out in Person,” USA Today/Buzz 60, February 20, 2017, watch online.
Posted by AK Pastor Blog at 9:50 AM No comments: