Sin Wages War Against the Soul 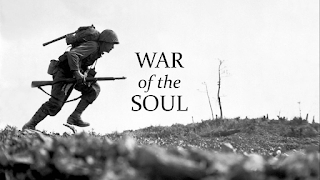 Peter says that sinful desires that remain in our hearts “wage war against your soul” (1 Peter 2: 11) — the military language correctly translates expression and conveys the imagery that sinful desires within us are like soldiers in a battle and their target is our spiritual well-being. To give in to such sinful desires, to nurture and cherish them in our hearts, is to give food, shelter, and welcome to the enemy’s troops. If we yield to the desires that “wage war” against our souls, we will inevitably feel some loss of spiritual strength, some diminution of spiritual power, some loss of effectiveness in the work of God’s kingdom. Moreover, when we sin as Christians we suffer a loss of heavenly reward. A person who has built on the work of the church not with gold, silver, and precious stones, but with “wood, hay, stubble” (1 Cor. 3: 12) will have his work “burned up” on the day of judgment and “he will suffer loss, though he himself will be saved, but only as through fire” (1 Cor. 3: 15). Paul realizes that “we must all appear before the judgment seat of Christ, so that each one may receive good or evil, according to what he has done in the body” (2 Cor. 5: 10). Paul implies that there are degrees of reward in heaven, 27 and that sin has negative consequences in terms of loss of heavenly reward. Wayne Grudem, Systematic Theology, p. 506
Posted by AK Pastor Blog at 9:43 AM No comments:

Sometimes Flight is the Best Fight

I found this ona Lifeway Leadership and is by Jon Bloom who is the director of Desiring God.

Don’t try to reason with your sin-infected appetites. An aroused appetite is almost always unreasonable. When a desire is awakened in you to indulge in some sin, your best defense is often escape.

Delight Rules the Kingdom of the Heart?

In the kingdom of the heart, the commanding hierarchy is this: King Delight rules and he tells General Desire what to want. General Desire then issues commands to Lieutenant Will to act on the want. No one does anything by “sheer will-power.” The will is not an independent agent. It is a soldier under authority that receives and obeys commands. The will might be strong or it might be weak and, like a soldier, it can be trained. But the will does what desire commands. And desire commands whatever delight believes will bring it the most pleasure or the least pain.

The Will Always Obeys Desire, Even to Do Undesirable Things

A man who desires to view a pornographic image can resist this desire, but only if he considers a competing desire, such inheriting the kingdom of God (1 Corinthians 6:9) or cherishing his wife (Ephesians 5:28-29) or avoiding the shame of being caught will result in a superior pleasure. A woman who desires to smoke a cigarette can resist that desire because of her superior desire to enjoy more robust health now and avoid lung cancer in the future. Jesus desired to avoid crucifixion and bear the Father’s wrath, but he endured it because he desired even more the superior eternal joy set before him (Hebrews 12:2). Likewise, a Christian denies himself, picks up his cross and follows Jesus because he wants the same eternal life of joy more than earthly pleasures (Matthew 16:24-25).

It’s important to understand how the hierarchy of the heart functions, especially when it comes to battling sin-infected appetites, which are sinful desires issuing orders to the will. When we experience those desires, what’s happening is that King Delight is being persuaded by a temptation that a sin will yield pleasure. And in that moment, the king may not be open to Counsel Reason.

That’s why reasoning with an awakened sinful appetite is like reasoning with a devil. It isn’t interested in or compelled by the truth; it is interested in a pleasure being offered. In fact, that appetite will seek to manipulate our reason in order to get the pleasure it seeks. It will twist every reasonable objection and minimize and muddle it in our minds. This is why we have often succumbed to an appetite’s demand even when our reason tells us it is wrong and even destructive. Cool reason usually melts in the presence of a hot desire.

Know When to Run

Reason is necessary in the battle against sinful desires. But typically not when a sinful appetite’s craving is upon us, especially if the source of gratification is close at hand. What we need to do at this point is run!

The Apostle Paul understood this. This is why he wrote, “flee from sexual immorality” (1 Corinthians 6:18). Sin-distorted sexual desire is a very powerful, persuasive appetite. Paul’s recommendation—no, his command—in the face of this appetite was to flee. Paul was very aware of this appetite’s ability to overpower our reason. So he told us to employ this intelligent, righteous alternative strategy: hightail it out of there.

Joseph in Genesis 39:11-13 is a great example of this. When Potiphar’s wife cornered him and tried to seduce him, Joseph wasted no time reasoning with her, which he knew from experience was a waste of time. He “fled out of the house.”

David in 2 Samuel 11 is an example of a failure to flee. When he was on his roof and saw Bathsheba bathing, he could have done what Joseph did. But he didn’t. He lingered and looked. His reason and conscience told him it was wrong. But the longer he lingered the stronger his appetite grew and the more he listened to its promise of pleasure and he let it overcome him.

We have all had our Joseph moments and our David moments. We’ve fled from and we’ve caved into sinful temptation. We all have certain familiar sinful appetites that tempt us to stumble. Therefore, we must make some plans of escape for the times when the temptation hits.

You know yourself. What are the patterns of temptation? When are the times that you are more vulnerable? When does the seductive voice speaks sweet insanities to you in such a way that you want to linger and look and listen?

There are two ways to flee from sinful appetites that seek to entrap us. The first is to flee from proximity to the temptation. Get out of the house, away from the computer or T.V. or phone or fridge or Facebook.

But sometimes fleeing from proximity to temptation is not an option. At that point we need to flee to visibility. Either we must flee to a visible place that will minimize temptation or we must let a trusted friend know about the temptation. Often the quickest way to douse a hot desire is to tell someone else about it.

The time for Counsel Reason to speak with King Delight about the highest, truest pleasures is when he’s open to listening to reason. But if a deceitful appetite is awakened today, don’t reason with it, run from it! Be ruthless. Run from proximity to the temptation or run to visibility on it.

Sometimes flight is the best way to fight sin.

Jon Bloom serves as author, board chair, and co-founder of Desiring God and has penned three books, Not by Sight, Things Not Seen, and Don’t Follow Your Heart.
Posted by AK Pastor Blog at 9:19 AM No comments: