The Defamation of the Term Born Again

I read Finally Alive by John Piper when it first came out in 2009 but am reviewing it for my Easter sermon this week, as I study 1 Peter 1:3-5.  It is an excellent treatise of a biblical theology of regeneration or being born again.  He correctly diagnoses the disease that plagues the church, an inadequate understanding of our moral corruption, what theologians call total depravity, then outlines the prescription, a biblical understanding of regeneration as the work of God, not the work of man.  The book is available as a free download. 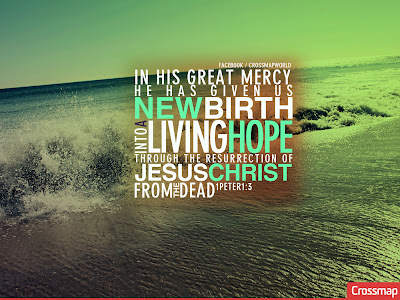 But not everyone today is jealous to esteem this miracle for the wonder that it is. If you go to research groups online, you can read things like this: “Born Again Christians Just as Likely to Divorce as Are Non-Christians.” The same kind of statistics are given by Ron Sider in his book The Scandal of the Evangelical Conscience: Why Are Christians Living Just Like the Rest of the World? (Grand Rapids: Baker, 2005) and by Mark Regnerus in his book Forbidden Fruit: Sex and Religion in the Lives of American Teenagers (Oxford University Press, 2007).
What matters most for our concern in this book is the way the term born again is being used. In particular, the Barna Group, a Christian research ﬁrm, has used it in reporting their ﬁndings. In the report titled “Born Again Christians Just as Likely to Divorce as Are Non-Christians,” Barna uses the word evangelicals interchangeably with born again and reports that:


In other words, the broadly deﬁned evangelical church as a whole in America and the West in general is apparently not very unlike the world. It goes to church on Sunday and has a veneer of religion, but its religion is basically an add-on to the same way of life the world lives, not a transforming power.
I want to say loud and clear that when the Barna Group uses the term born again to describe American church-goers whose lives are indistinguishable from the world, and who sin as much as the world, and sacriﬁce for others as little as the world, and embrace injustice as readily as the world, and covet things as greedily as the world, and enjoy God-ignoring entertainment as enthusiastically as the world—when the term born again is used to describe these professing Christians, the Barna Group is making a profound mistake. It is using the biblical term born again in a way that would make it unrecognizable by Jesus and the biblical writers.
Here is the way the researchers deﬁned born again in their research:“Born again Christians” were deﬁned in these surveys as people who said they have made “a personal commitment to Jesus Christ that is still important in their life today” and who also indicated they believe that when they die they will go to Heaven because they had confessed their sins and had accepted Jesus Christ as their savior. Respondents were not asked to describe themselves as “born again.”
Being classiﬁed as “born again” is not dependent upon church or denominational afﬁliation or involvement. In other words, in this research the term born again refers to people who say things. They say, “I have a personal commitment to Jesus Christ. It’s important to me.” They say, “I believe that
I will go to Heaven when I die. I have confessed my sins and accepted Jesus Christ as my Savior.” Then the Barna Group takes them at their word, ascribes to them the inﬁnitely important
reality of the new birth, and then slanders that precious biblical reality by saying that regenerate hearts have no more victory over sin than unregenerate hearts.
I’m not saying their research is wrong. It appears to be appallingly right. I am not saying that the church is not as worldly as they say it is. I am saying that the writers of the New Testament think in exactly the opposite direction about being born again. Instead of moving from a profession of faith, to the label born again, to the worldliness of these so-called born again people, to the conclusion that the new birth does not radically change people, the New Testament moves in the other direction.
It moves from the absolute certainty that the new birth radically changes people, to the observation that many professing Christians are indeed (as the Barna Group says) not radically changed, to the conclusion that they are not born again. The New Testament, unlike the Barna Group, does not deﬁle the new birth with the worldliness of unregenerate, professing Christians.
For example, one of the main points of the First Epistle of John is to drive home this very truth:


We will come back to texts like these in the chapters to come. There are many questions to answer, and we will distance ourselves plainly from perfectionism and deal realistically with the failures of genuine Christians. But for now, is it not true that these statements appear to be written with the very claims of the Barna Group in mind? Are Augustine, Lewis, Barna, and the Bible these texts not addressed to the false claim that born again people are morally indistinguishable from the world? The Bible is profoundly aware of such people in the church. That is one reason why 1 John was written. But instead of following the Barna Group, the Bible says that the research is not ﬁnding that born again people are permeated with worldliness; the research is ﬁnding that the church is permeated by people who are not born again (italics mine). John Piper, Finally Alive, pgs. 12-14