3 WAYS ‘THE BLIND MEN AND THE ELEPHANT’ STORY BACKFIRES 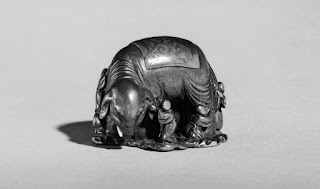 A great example of the flaws of a popular ideology from Trevin Wax at Gospel Coalition.
The Parable of the Elephant and the Blind Men is a well-known story that resonates in a culture where diversity is valued and multiple perspectives are promoted.
The story originated in India and has been used in Jain, Buddhist, Hindu, and Sufi contexts. The most common version in the West comes from Lillian Quigley’s children’s book about six blind men who visit the Rajah’s palace and encounter an elephant.

THE PARABLE OF THE BLIND MEN AND THE ELEPHANT

An argument ensued, each blind man thinking his own perception of the elephant was the correct one. The Rajah, awakened by the commotion, called out from the balcony. “The elephant is a big animal,” he said. “Each man touched only one part. You must put all the parts together to find out what an elephant is like.”
Enlightened by the Rajah’s wisdom, the blind men reached agreement. “Each one of us knows only a part. To find out the whole truth we must put all the parts together.”

THE APPLICATION OF THE PARABLE

The moral of the story goes something like this: we all have different experiences. Therefore, whenever we find ourselves at odds with others, we should be humble and recognize our limitations of knowledge, our need for other perspectives, and trust that others may grasp truths that we do not.
Applied to religion, the story says no one has the comprehensive vision of truth. We need all the religions of the world if we are going to grasp the truth about spiritual reality.

The Parable of the Blind Men and the Elephant is memorable in its delivery of a message and its prompting toward humility. But as an explanation for why no religion or perspective can claim to be right and others wrong, it backfires in three ways.

1. The story undercuts its call to humility through the arrogant claim of having the comprehensive truth it says is unavailable.

Lesslie Newbigin, famous missionary to India, pointed out the flaw in the story:

“The story is told from the point of view of the king and his courtiers, who are not blind but can see that the blind men are unable to grasp the full reality of the elephant and are only able to get hold of part of the truth. The story is constantly told in order to neutralize the affirmation of the great religions, to suggest that they learn humility and recognize that none of them can have more than one aspect of the truth.
“But, of course, the real point of the story is exactly the opposite. If the king were also blind there would be no story. The story is told by the king, and it is the immensely arrogant claim of one who sees the full truth which all the world’s religions are only groping after. It embodies the claim to know the full reality which relativizes all the claims of the religions and philosophies.” (The Gospel in a Pluralist Society, 9-10)

Tim Keller sums up the contradiction this way:

2. The story undercuts the idea that the blind men should be satisfied with partial knowledge by revealing the full truth at the end of the tale.

When you first hear the parable, you think the moral is to look for whatever is true in someone else’s perspective. But the story backfires when you consider that each of the blind men was wrong about what the elephant was.
In “The Elephant in the Room,” an article in the July/August 2016 issue of Gilbert,David Fagerberg writes:

“Far from being satisfied with their idiosyncratic, partial, perspective-driven, limited understanding, the blind men would have wished for the light by which they could see the whole, the true, the real, that upon which they could all agree, the final reality that would account for each of their perceptions.”

Fagerberg then applies the tale to the university setting:

“We each grope in our individual darkness (touching our part of the elephant), but the liberal arts should turn on the light so we can learn reality. The reason it is called a UNIversity is because there is one truth, one goodness, one beauty, particularized in an infinite number of ways, and we fail the elephant and we fail our own perceptiveness if we content ourselves with MULTIversity. There ought to be a reality toward which our perspectives should advance, even if it is done by dialogue.”

Instead of humbly acknowledging that we are blind and cannot see the full elephant, the story should drive us to seek the truth. In that search, we do indeed rely on others—not so we can be satisfied with multiple perspectives, but so that we can argue toward Truth together.

“The point of the story is that in their darkness the men were not seeing the elephant truly. There is a reality, and it is incumbent on us to see it accurately.”

3. The story undercuts its idea of blindness by opening the door for revelation at the end.

Notice that the story ends with the Rajah (who can see) explaining the reality of the elephant. The blind men need revelation in order to receive the truth.
Revelation changes everything. The reason the Blind Men and the Elephant doesn’t work as an illustration of the various religions is because the three Abrahamic faiths would say that the elephant, as a metaphor for God, can speak!
Greg Koukl writes:

“Even though the men are blind, the elephant isn’t necessarily mute. This is a factor the illustration doesn’t allow for: What if the elephant speaks?
“The claim of Christianity is that man doesn’t learn about God by groping. Instead, discovery is through God’s own self-disclosure. He is not passive and silent, leaving us to guess about His nature. God tells us what He is like and what He wants.
“If God speaks, this changes everything. All contrary opinions are silenced, all conjectures are put to rest. God has made Himself known, giving us a standard by which to measure all other religious claims. The parable of the blind men does not take this possibility into account. Yet three of the world’s great religions—Christianity, Judaism, and Islam—make this claim.”