What Happens to Those Who Never Hear the Gospel? 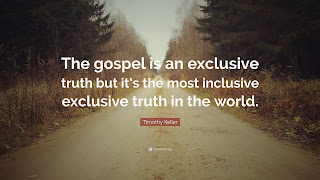 The man on the island. Perhaps you’ve encountered him in a friend’s argument against Christianity.
Maybe you’ve even voiced the objection yourself.
How could a good and loving God condemn to hell someone who’s never heard of him?
When it comes to this emotionally vexing issue, there are two dominant positions among professing Christians: inclusivism and exclusivism. While both views maintain that Jesus is the only way to God, only one insists on the necessity of conscious faith in him.

Inclusivism is the belief that salvation is only through Jesus Christ, but that there may be persons who are saved without knowing it. They are redeemed by the person and work of a Christ they do not consciously embrace. Simply put, Jesus may save some who never hear of him.

Inclusivists often cite Romans 2:1–16, a passage taken to imply that salvation is possible apart from God’s special revelation. The content of general revelation—both the created order without (Rom. 1:19–20) and the moral law within (Rom. 2:14–15)—provides sufficient knowledge for salvation. As Millard Erickson explains, “The rise of more inclusive views of salvation, even among evangelicals, is based on a belief in the efficacy of general revelation for a salvific relationship to God” (Christian Theology, 123).
Additionally, many inclusivists appeal to the precedent of Old Testament saints who were saved without knowing the name of Jesus. Erickson writes:
What if someone were to throw himself . . . upon the mercy of God, not knowing on what basis that mercy was provided? Would not such a person in a sense be in the same situation as the Old Testament believers? The doctrine of Christ and his atoning work had not been fully revealed to these people. Yet they knew there was provision for the forgiveness of their sins, and that they could not be accepted on the merits of any works of their own. They had the form of the gospel without its full content. And they were saved. (138)
But doesn’t this parallel trivialize Christ’s saving work? Not at all, Erickson insists, for Jesus is still the source of every saving benefit:
The basis of acceptance would be the work of Jesus Christ, even though the person involved is not conscious that this is how provision has been made for his salvation. . . . Salvation has always been appropriated by faith. . . . Nothing has been changed in that respect. (138)
What matters to God, the inclusivist says, is human faith responding to the “light” he has provided at a given time or place. It’s unwarranted, then, for anyone to claim to know the fate of the unevangelized. One pastor put it this way: “I believe the most Christian stance is to remain agnostic on this question. The fact is that God, alongside the most solemn warnings about our responsibility to respond to the gospel, has not revealed how he will deal with those who have never heard it.”1
Many inclusivists appeal to God’s character in defense of their view. Because “God is love,” the argument goes, he’d never condemn someone who didn’t even have a chance to be saved (1 John 4:8, 16). “I agree that inclusivism is not a central topic of discussion in the Bible and the evidence for it is less than one would like,” Clark Pinnock admits. “But the vision of God’s love there is so strong that the existing evidence seems sufficient to me.”

In contrast to inclusivism, exclusivism is the view that redemption is possible through only faith in the gospel.2 This has been the predominant Christian position throughout church history and remains so among Bible-believing evangelicals today.3 Several texts are commonly cited in its defense. Here are five.
1. Romans 1
First, though inclusivists sometimes employ Romans 1:18–23 to highlight the importance of general revelation, on closer reading the text actually supports the exclusivist view. Paul’s argument is that God’s revelation in nature is sufficient only to condemn, not to save. Though the man on the island “knows God” (v. 21), he “suppresses the truth” (v. 18) perceptible in nature and is therefore “without excuse” (v. 20). Humans aren’t guilty because they haven’t heard the gospel; they’re guilty because they haven’t honored their Creator. In other words, not because of the absence of something (faith), but because of the presence of something (rebellion).
So will God condemn the innocent tribesman who has never heard the name of Christ? No, because there are no innocent tribesmen.
Scripture simply does not picture fallen humans as having some vague but noble desire for mercy and forgiveness. Moreover, we seem to have an inescapable pull toward enacting our faith in ritual, liturgy, and sacrifice. So what does the man on the island do? In the imagination of the inclusivist, he just cries out for vague mercy and forgiveness, claiming no merits of his own. In the real world, however, he probably participates in a form of idolatrous folk religion that contradicts and undermines the gospel of grace. (Daniel Strange’s work is helpful here, particularly his insight into how non-Christian religions are “subversively fulfilled” in the gospel of Christ.)
2. Romans 10
Second, the necessity of gospel faith for salvation is on display in Romans 10:
For “everyone who calls on the name of the Lord will be saved.” How then will they call on him in whom they have not believed? And how are they to believe in him of whom they have never heard? And how are they to hear without someone preaching? . . . So faith comes from hearing, and hearing through the word of Christ. (Rom. 10:13–15,17)
The chain of logic in Paul’s mind is straightforward:
The reality of another means of salvation besides faith in “the word of Christ” is difficult to square with this passage.
3. John 14
Third, we must do justice to Jesus’s declaration, “I am the way, and the truth, and the life. No one comes to the Father except through me” (John 14:6; cf. 10:7, 9). Though inclusivists sometimes object that this statement says nothing explicit about faith, the idea is surely implied. The whole aim of John’s Gospel, after all, is to convince readers to believe and be saved (John 20:30–31), as the preceding context makes plain (John 3:36; 5:23–24; 6:35;7:38; 8:19, 24, 42; 11:25; 12:46). The apostle addresses belief no less than 97 times throughout the book. In light of the entire context, then, “through me” means “through faith in me.”
4. Acts 4
Fourth, the apostle Peter declares: “And there is salvation in no one else, for there is no other name under heaven given among men by which we must be saved” (Acts 4:12). Note he doesn’t merely say that there’s no other savior under heaven—something with which inclusivists would agree—but specifically that there’s no other name. Apparently, knowing this savior’s name—his precise identity—is necessary.
5. Acts 10
Finally, there’s a particularly revealing story in Acts 10. God hears the prayers of a devout Gentile named Cornelius and instructs him to send for “a man who is called Peter” (v. 5). Arriving the next day at Peter’s house, Cornelius’s men announce: “Cornelius, a centurion, an upright and God-fearing man, who is well spoken of by the whole Jewish nation, was directed by a holy angel to send for you to come to his house and to hear what you have to say” (v. 22).
Peter then journeys with the men to Cornelius’s house, where the centurion addresses his apostolic guest: “Now we are all here in the presence of God to hear all that you have been commanded by the Lord” (v. 33). What’s interesting is that Cornelius wasn’t expecting any random message but specifically—as an angel had told him—a “message by which you will be saved, you and all your household” (Acts 11:14). In other words, it was a message without which Cornelius would have remained, despite all of his religious sincerity, eternally lost.
Why do I point to this story? Two reasons. First, because if a genuine unreached “seeker” were to exist, why wouldn’t we expect God to reveal the gospel message to him or her—whether through a missionary or a dream—just as he did to Cornelius? Second, and more importantly, because if ever there was a candidate for salvation through general revelation, surely it would’ve been Cornelius! He was as devout and God-fearing as possible given the “light” he’d received. But as the chapter unfolds, it becomes clear that even extraordinary religious sincerity isn’t enough. It was necessary for Peter to leave his home and travel more than 30 miles to deliver a message without which, Scripture suggests, even the most spiritually responsive person in the world cannot be saved.

So what happens to those who never hear the gospel? The question isn’t some vague theological abstraction; it’s practically relevant and eternally serious. Your view of missions, for example—in terms of both its nature and its urgency—will be directly shaped by your view of the man on the island’s fate. (It’s also worth asking, if divine condemnation results from rejecting Christ, why love wouldn’t compel us to withhold him from the unevangelized.)
Still, one may wonder, isn’t exclusivism unfair? Though it may feel that way at times, in the final analysis we must trust the wisdom of an unfathomably good and merciful God. Perhaps this answer sounds like a cop-out, but it’s not. It’s the posture of humility. After all, it is not our place to subject the Creator to our finite and fallen notions of fairness. Our task is to take him at his word and trust his heart. His ways are higher and different than ours (Isa. 55:8–9). He needs no counselor, for he is good and does good (Ps. 119:68; Rom. 11:34). The Judge of all the earth will do right (Gen. 18:25). And above all, we must stare at Calvary, the summit of wisdom and the intersection of justice and love. There, on a Roman tree, the Judge of all the earth hung in the place of rebels who wanted nothing to do with him.
“Visit many good books, but live in the Bible,” Charles Spurgeon once advised. The most important thing we can do when faced with an emotionally charged topic like this is to open the Word of God, pray for humility and understanding, and then embrace what it says.
1 It’s worth distinguishing between more explicit inclusivists (who insist God will save some who’ve never heard) and more agnostic types (who claim they don’t know for sure). EvenHerman Bavinck is not dogmatic in his exclusivism in light of God’s unilateral sovereignty.
2 Infants and those with mental disabilities that preclude processing didactic information are believed by many (if not most) exclusivists to be in a separate category. Naturally incapable of exercising conscious faith, they cannot be included in the Romans 1picture—that of a rebellious humanity “without excuse” on the basis of the fact that they “know” God and yet actively “suppress the truth.” An infant cannot be judged according to works (Rom. 2:6; 1 Pet. 1:17). Many exclusivists believe God deals graciously with such non-sentient image-bearers, on the basis of Christ’s work, apart from personal faith.
3 For accessible book-length treatments, see Christopher Morgan and Robert Peterson’s (eds.) Faith Comes by Hearing: A Response to Inclusivism (IVP Academic, 2008) and John Piper’s Jesus, the Only Way to God: Must You Hear the Gospel to Be Saved? (Baker, 2010). For a more academic consideration, see Daniel Strange’s The Possibility of Salvation Among the Unevangelized: An Analysis of Inclusivism in Recent Evangelical Theology (Wipf and Stock, 2007).