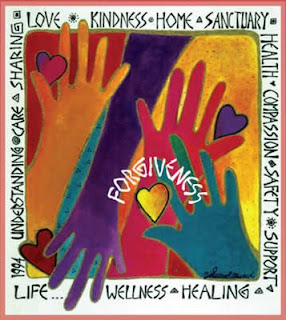 I am reading a great book, 'Forgiveness' by Gary Inrig, in preparation for last weeks message.  It is the the best book I have read on forgiveness both for his content and his stories that he uses to illustrate the truth he is communicating.  He gave the following list of scriptural metaphors describing forgiveness (I meant to read them Sunday but forgot).  I trust they will impact you as much or more than they did me!

Old Testament
He drowns them
He will again have compassion on us; he will tread our iniquities underfoot. You will cast all our sins into the depths of the sea. (Mic 7:19 ESV)
He erases them
"I, I am he who blots out your transgressions for my own sake, and I will not remember your sins. “  (Isa 43:25)
He dissolves them
“I have blotted out your transgressions like a cloud and your sins like mist; return to me, for I have redeemed you.” (Isa 44:22 ESV)
He puts them behind his back
Behold, it was for my welfare that I had great bitterness; but in love you have delivered my life from the pit of destruction, for you have cast all my sins behind your back. (Isa 38:17 ESV)
He forgets them
“And no longer shall each one teach his neighbor and each his brother, saying, 'Know the LORD,' for they shall all know me, from the least of them to the greatest, declares the LORD. For I will forgive their iniquity, and I will remember their sin no more." (Jer 31:34 ESV)
He covers them
“Blessed is the one whose transgression is forgiven, whose sin is covered.” (Ps 32:1 ESV)
He does no record them
“Blessed is the man against whom the LORD counts no iniquity, and in whose spirit there is no deceit.” (Ps 32:2 ESV)
He totally removes them
“As far as the east is from the west, so far does he remove our transgressions from us.” (Psa 103:12 ESV)

New Testament
He forgives them
“In him we have redemption through his blood, the forgiveness of our trespasses, according to the riches of his grace.” (Eph 1:7 ESV)
“He has delivered us from the domain of darkness and transferred us to the kingdom of his beloved Son, 14 in whom we have redemption, the forgiveness of sins.” (Col 1:13 ESV)
He wipes them out and erases them
“Repent therefore, and turn again, that your sins may be blotted out.” (Acts 3:19 ESV)
He takes them on himself
“He himself bore our sins in his body on the tree, that we might die to sin and live to righteousness. By his wounds you have been healed.” (1Pe 2:24 ESV)
He does not charge them to our account
“That is, in Christ God was reconciling the world to himself, not counting their trespasses against them, and entrusting to us the message of reconciliation. (2Co 5:19 ESV) ESV
He charges them to Christ’s account
“For our sake he made him to be sin who knew no sin, so that in him we might become the righteousness of God.” (2Co 5:21 ESV)
He nails them to the cross
“And you, who were dead in your trespasses and the uncircumcision of your flesh, God made alive together with him, having forgiven us all our trespasses, by canceling the record of debt that stood against us with its legal demands. This he set aside, nailing it to the cross.” (Col 2:13-14 ESV)


He purges us from them
“He is the radiance of the glory of God and the exact imprint of his nature, and he upholds the universe by the word of his power. After making purification for sins, he sat down at the right hand of the Majesty on high.” (Heb 1:3 ESV)
He does away with and puts away our sin
“For then he would have had to suffer repeatedly since the foundation of the world. But as it is, he has appeared once for all at the end of the ages to put away sin by the sacrifice of himself.” (Heb 9:26 ESV)
“You know that he appeared to take away sins, and in him there is no sin.” (1Jo 3:5 ESV)
He cleanses us and purifies us from them
“But if we walk in the light, as he is in the light, we have fellowship with one another, and the blood of Jesus his Son cleanses us from all sin.” (1Jo 1:7 ESV)
He sets us free from them
“From Jesus Christ the faithful witness, the firstborn of the dead, and the ruler of kings on earth. To him who loves us and has freed us from our sins by his blood and made us a kingdom, priests to his God and Father, to him be glory and dominion forever and ever. Amen.” (Rev 1:5-6 ESV)
Posted by AK Pastor Blog at 11:40 AM