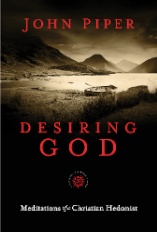 Multnomah recently published a 25th anniversary edition of John Piper’s classic, Desiring God, Meditations of a Christian Hedonist (the only edition I do not own!). Piper answered a few questions that Justin Taylor asked him.
As anyone who knows me and and the influences in my life, you will know that I have great admiration for Piper.  He, as well as Dan Fuller (who Piper mentions) and Jonathan Edwards rescued me.  Let me explain.  "Desiring God" rescued me from legalism and obedience as duty rather than a delight; Dan Fuller rescued me from theological snobbery, showing me the unity and consistency of the whole bible in his excellent book, Unity of the Bible; and Jonathan Edwards clear and deep thinking that added theological depth and clarity (any lack of that is not attributed to him!) to my faith.

Justin:
In the Preface you explain the convergence of a number of things that turned you into a “Christian Hedonist” (Pascal, Lewis, the Psalms, etc.). Did you invent the term, or did you learn it from Daniel Fuller?
I don’t remember. I certainly saw the word “hedonism” used positively in several authors roughly in the way I use it. I don’t recall seeing the exact phrase “Christian Hedonism.”
The key living person in shaping the vision was Daniel Fuller. His unpublished Hermeneutics Syllabus that I read in his class in the Fall of 1968 had a section entitled “We are far too easily pleased.” This section developed the argument of C. S. Lewis from his sermon “The Weight of Glory.” The first page of that sermon, and it’s unpacking by Dan Fuller, was the flashpoint where things exploded in my head and heart.
Justin:
Was there a moment you remember when the thesis crystallized in your mind: “God is most glorified in us when we are most satisfied in him”?
As I recall one of the most influential early evidences for that truth in my experience was the coming together of two passages on prayer in John’s Gospel: John 14:13 and 16:24, “Whatever you ask in my name, this I will do, that the Father may be glorified in the Son. . . . Ask, and you will receive, that your joy may be full.” Prayer assumes the pursuit of God’s glory and our joy. Only later did I see the way Paul argued in Phil. 1:20–21—that Christ is magnified most in our dying when we count dying gain; that is, when we are more satisfied in him than anything this life offers.
I had read in seminary Edwards’s End for Which God Created the World, but did not see till years later how he came within a hair of saying God is most glorified in us when we are most satisfied in him: “God is glorified not only by His glory’s being seen, but by its being rejoiced in. When those that see it delight in it, God is more glorified than if they only see it.”
The way things work for me is that each time I speak on this subject, I ask the Lord for fresh power and fresh words. It is amazing to me how many fresh insights come in trying to say old things in ever new ways. One day, I don’t recall when, that particular rhyming wording came to me. I am thankful for it. It does come close to summing up my life’s work.
To read the whole interview, click here.
Posted by AK Pastor Blog at 11:50 AM