FINDING OUR VOICE: WHY THE DECLINE OF CONGREGATIONAL SINGING MATTERS–AND HOW TO FIX IT 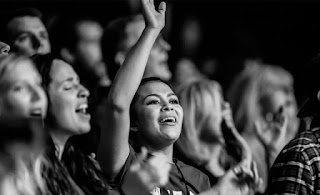 Too many songs. Not enough singers. That’s the problem facing many congregations these days, says Tony Payne, veteran worship leader and associate professor of music at Wheaton College.

Whether a church plays hymns or the latest worship songs, fewer people want to sing along, he says. “There are a lot of people standing there mute during worship.”

Congregational singing has long been a staple of Protestant churches, ever since the Reformation, when “A Mighty Fortress is Our God” was the latest hit worship song. And today churches have more songs to choose from than ever before.

LifeWay Worship, for example, has a catalog of 4,000 worship songs, while Christian Copyright Licensing International (CCLI) has 300,000—all available at the click of a button.

Yet Payne and other veteran worship leaders worry congregational singing is on the decline.

That’s bad news, says Rick Eubanks, pastor of worship and students at Oak Grove Baptist Church in Burleson, Texas. Congregational singing is an essential part of Christian worship, he says. When churches don’t sing together, something vital is missing.

“Gathering for worship is not about watching other people perform,” he says. “And it’s not about the music; it’s about allowing people to connect with God.”

How did we get here?

Mike Harland, director of LifeWay Worship, says a number of factors have contributed to the decline in congregational singing. Among them: the fact that there are fewer places for congregation members to sing in church, in large part due to the decline of choirs.

In 1998, 54 percent of American churches had a choir, according to the National Congregations Study. By 2012, fewer than half had a choir (45 percent).

Larger evangelical churches, in particular, have steered away from choirs—in part due to finances and in part because they’ve embraced contemporary styles of music. More than two-thirds (69 percent) had choirs in 1998. By 2012, just over a third (36 percent) had choirs.

That’s troubling, say the authors of the National Congregations Study, as it means fewer lay people have a role to play in worship.

“The decline of choirs is worth examining in its own right because singing in the choir is one of the most common ways, along with Bible studies, for people to become more deeply involved in a congregation, and it is the single most common way for lay people to participate actively in gathered worship,” according to the study’s author.

“A choir can be a permission-giving organization,” he says. “They give people permission to sing along.”

Another factor could be the consumerist mindset prevalent in many churches today.

“We’ve been taught in our churches and in the Christian marketing subculture around us to treat music as another product to consume—just as we have the rest of our faith,” writes worship pastor Mike Cosper in his book Rhythms of Grace.

“If something doesn’t meet our preferences, we’ve learned to discard it, join another church, and buy a different CD. We’ve learned to be spectators on Sundays—listening, enjoying, and critiquing—but the Bible unapologetically calls us to be participants.”

If church members don’t come to church with an attitude of worship, they aren’t likely to engage.

A 2008 LifeWay Research study found many churchgoers feel disconnected during worship. Almost half (47 percent) of the 2,5000 Protestant churchgoers in the survey said they were often “going through the motions” during the singing and prayer portions of worship services.

About half of white evangelicals attend a church that uses multimedia screens during services, according to the Public Religion Research Institute. Turning down the lights makes the screens easier to read. But Harland says it can send an unintended message.

“When you turn the lights off and you have theatrical lighting on stage, you’re suggesting to the congregation they are here to watch something rather than participate,” he says.

Another factor: singing isn’t always seen as a discipleship strategy.

Harland says pastors and music ministers aren’t always on the same page. The music ministry does its own thing at times, rather than being integrated into the mission of the church. And pastors in turn don’t always value the contributions of music ministries. Instead, music is sometimes seen as a warm-up to the sermon.

Too many songs, too fast

Then there’s the overwhelming number of worship songs available to churches.

“Musicians like that because they tend to get bored playing the same songs,” says Harland. “They like to play new music, and congregations get lost in the wake of a constant song shuffle.”

Payne worries about the pace of modern worship music. Learning new songs takes time and repetition, he says. He wonders if worship leaders try to rush the process and end up giving up too soon.

“We’re constantly learning songs that have a limited shelf life,” says Payne. “In a few months they’ll be gone forever and we’re on to something else.”

No one wants to sound bad

There’s also the reality that most people don’t often sing in public. Church attendance has become less frequent, so people have fewer chances to sing in a group during a month. And corporate singing of any kind has steadily declined in American culture the last half century.

It’s not surprising people don’t sing when they’re in church, says Keith Pipes, a veteran worship pastor in Nashville. Singing in a group can feel awkward these days, he says.

“There are people who have never sung in an organized group before,” he says. “Then they show up to church and they are asked to sing with a couple hundred people. They may feel that is really odd.”

If people don’t feel comfortable with a hymn or worship song, they’re unlikely to sing, says Rita Ruby, a voice teacher and worship leader from Chicago.

“No one wants to sound horrible—especially with someone sitting right in front of you,” she says.

Moving an unengaged audience to full engagement is not an easy task. It may take some time, patience, and intentional training. There’s no magic formula or even one style of worship that will convince people to sing.

Fortunately, say Harland and other worship pastors, there are some steps church leaders can take to help congregations enjoy singing and participate.

Finding the right key is essential, says Eubanks. Most worship leaders, he says, sing in a key that fits them, so they can lead out as strongly as possible. Unfortunately, people can’t always follow them in that key. Instead, he says, pick a key that has the widest appeal.

“A song will be in the key of B flat on the CD, but most people can’t sing that high,” he says. “If we can bring it down to the key of G, that will be OK for most vocal ranges.”

Few people can hear a song or hymn once and be ready to sing along. So break down a song into smaller pieces, says Pipes. Take a few minutes to sing the chorus a couple of times until people become familiar with it. Then add the verses.

Repetition is also crucial. Don’t be afraid to sing a new song two or three weeks in a row until people learn it, Pipes says.

Tell church members what they will be singing ahead of time

Let church members know in advance what songs will be sung on Sunday and provide links to the music in a church newsletter, email, or post on the church’s website. Churchgoers can listen ahead of time and be ready to sing.

Harland tries to include a favorite hymn or worship song in every service. It’s usually a song the congregation knows well, one that is set in a comfortable key, and one the congregation loves to sing.

With enough wins, the congregation’s confidence will grow. Plus, people will learn to trust the worship leaders—and will be willing to follow them.

And don’t forget the power of a familiar hymn—one that’s lodged in the collective memory of a church. Those songs can help a congregation sing without having to worry about remembering the words or how the tune goes.

Want people to sing? Turn on the lights. Having the room even somewhat illuminated can help the congregation engage in worship.

Frank Byers, media director at the Bridge Church in Spring Hill, Tennessee, says church leaders can learn from secular musicians who intentionally take steps to connect with their audience.

One of those ways is to make eye contact with audience members. By contrast, he says, many worship leaders close their eyes during the service. That can shut them off from the congregation.

“If I don’t look at them, how can I welcome the congregation into worship?” he says.

He sees the role of worship leader as a facilitator—helping the congregation as a whole connect with God through singing and worship.

Body language also matters when leading music, says Payne. Worship leaders should guide the congregation through a song—giving them cues and encouraging them to sing.

“Something as simple as a smile on your face can give the congregation permission to sing,” he says.

“Good pastoral leadership will include wise decisions about songs and dynamics, ensuring that services create space for the congregation to hear themselves, to hear one another, and to join their voices in song,” writes Cosper.

Remember why you sing in the first place

Pastors, worship leaders, and congregations have to believe singing matters, or they won’t ever want to sing, says Harland. Churches sing, he says, because Scripture expects them to.

They also sing because it’s a powerful form of discipleship that marries truth and melody and imbeds that truth in people’s souls.

“In Ephesians 5, Paul writes that we should speak to one another with psalms, hymns, and spiritual songs,” says Pipes.

“When we gather in corporate worship, we’re not only singing to God—we’re singing about God to one another. Through song, we can encourage and instruct our fellow brothers and sisters in Christ. Our worship through song also serves as a witness to non-Christians sitting in our pews.”

There’s a joy that comes from singing in church, says Payne. “It builds community and helps churches learn spiritual truths and live them out.”

Harland agrees: “The gathering of the body of Christ is a body that ought to be singing.”

BOB SMIETANA (Bob.Smietana@LifeWay.com) is senior writer for Facts & Trends.
Posted by AK Pastor Blog at 9:59 AM