HOW MARGINALIZATION CAN EMPOWER CHRISTIANS ON MISSION 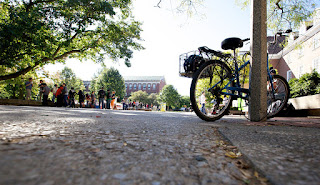 Here is an excellent article by Trevin Wax at Gospel Coalition about the the marginalization of InterVarsity through discrimination and even persecution and their biblical response.  They did not play the victim, not complain, but responded in biblical love, compassion, and mission.  The result is that they are growing in their influence!

The most difficult place to be a convictional Christian in North America is probably the campus of a university. Christian students frequently speak of the hostility they face on campus when they are open about their Christian faith and practice.
If the university is a microcosm of the rest of society and a sign of where our culture is headed, then Christians can expect hostility and marginalization to increase in the coming years. The good news is: if Christian organizations on campus are any indication, this marginalization could become the catalyst for more effective mission.

The Challenge to InterVarsity

Take, for example, InterVarsity Christian Fellowship – a campus group that has faced opposition over the past 15 years.
In 2000, InterVarsity was expelled from Tufts University. The reason? The doctrinal and behavioral standards for InterVarsity leaders were distinctively Christian, thus excluding non-Christians. Other schools followed suit: Harvard, Williams College, and Rutgers.
It seems silly to many Americans to require an organization open its leadership to anyone, no matter what they believe. How can a group centered on a particular set of beliefs not require its leaders to hold those beliefs? How could a Christian organization appoint an atheist to lead it? Why should the College Democrats allow a Republican president? (Interestingly, the policies aimed at InterVarsity were applied inconsistently. Muslim groups that not only require certain beliefs of leaders but alsomembers were left alone.)
The problem for InterVarsity wasn’t just a matter of doctrine, but of practice. It was the requirement that leaders abstain from any sexual relationship outside of biblical marriage that caused particular consternation. By asking leaders to live by Christian faith and practice, InterVarsity had run afoul of our culture’s commitment to sexual liberty.
For more than a decade now, InterVarsity has faced multiple controversies regarding their groups’ leadership standards. In 2010, the Supreme Court ruled that universities had the right to require groups to open their leadership to all, as long as they applied that policy fairly and required all groups to adopt that “all comers” philosophy.
Last year, after Vanderbilt University excluded InterVarsity, Tish Warren wrote about the experience as a Christian who sees herself as a moderate – not politically or theologically conservative. Her testimony made clear that it is biblical orthodoxy, not one’s political leanings, that causes the offense.

“The line between good and evil was drawn by two issues: creedal belief and sexual expression. If religious groups required set truths or limited sexual autonomy, they were bad—not just wrong but evil, narrow-minded, and too dangerous to be tolerated on campus.”

Soon after Vanderbilt barred InterVarsity, California de-recognized the campus organization from all 23 state schools. (InterVarsity has since been reinstated.)

How did InterVarsity respond to these challenges?
First, students didn’t pretend to be martyrs. They did not see themselves as helpless victims of liberal tyranny. Being shamed or relegated to second-class status is marginalization, not martyrdom — and they know the difference. Perhaps due to InterVarsity’s global outreach and ethnic diversity, these believers avoided words like “persecution” for their own situation when they are well aware of true persecution in other parts of the world.
Secondly, because InterVarsity students did not see exaggerate their difficulties, they were better prepared to treat their opponents with respect and dignity. They overcame the temptation to resent the people who marginalized them. Even though they were taunted and shamed, accused of being intolerant bigots no better than white supremacists, they cheerfully served the people who maligned them. They brought water and doughnuts to LGBT groups protesting them. They took stands against LGBT bullying even while facing ideological bullies in university leadership. They prayed for their university leaders and found creative ways to support and strengthen the institutions that were bent on driving them out.
David French witnessed InterVarsity’s cheerful courage and compassion firsthand:

“With my own eyes I’ve seen young college students – kids who months before never imagined they’d be at the center of a national controversy – braving physical intimidation in deliberately darkened hallways, barred from entering campus hearing rooms to respectfully defend religious freedom. I’ve seen young women endure rape threats and death threats yet double down on their faith commitments and commitment to free speech for all. Young students have been subjected to Star Chamber-like proceedings in which furious campus administrators tried to hector them into doubting and denying their faith. And students have turned out by the hundreds, crowding campus buildings, to pray for their university and protest their unjust punishments.”

InterVarsity leaders challenged policies they believed were unwise or discriminatory, but whenever they lost, they submitted to the decisions and moved forward without campus recognition.

What Happened to InterVarsity

Today, InterVarsity’s reports of conversion are up 172% from just ten years ago. In the past four years, InterVarsity has grown at a double-digit rate, increasing their presence on more than 100 new campuses and ministering to 40,000 students (up from 31,000).
If marginalization is a danger to a Christian organization’s mission, the numbers sure don’t show it. In fact, we might say the opposite is true.
We often talk about how the test of one’s character, one’s inner fortitude (one’s “mettle,” to use the old English word) takes place in times of adversity. People say: “I didn’t know what I had in me until this happened!”
InterVarsity has faced adversity, but through that experience, its members have drawn out the beauty of Christianity in practice. A distinctive display of love for enemies is one of the most powerful marks of a Christian. But in order to display that love, you must find yourself in a place where you are maligned, misunderstood, or mistreated for your faith.

I hope the Church takes note. We shouldn’t see ourselves as martyrs facing bitter persecution. Neither should we given in to a poisonous resentment that reinforces the feeling of being beleaguered and oppressed.
Instead, like InterVarsity, we ought to see how the cultural challenges that lie ahead are not obstacles that hinder us, but avenues for our faith to shine brighter. That’s why Paul spoke of suffering as something to rejoice in – something that produces endurance and strengthens our hope in God.
InterVarsity is proof that cultural marginalization can actually help Christians be better. Being marginalized in wider society doesn’t mean that our Christian faith and practice has to suffer. It might just be the catalyst for even more effectiveness in our mission.
Posted by AK Pastor Blog at 6:31 AM