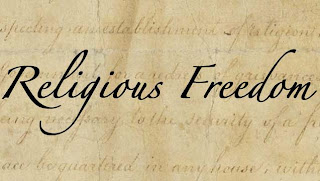 Here are four interesting observations by a bishop and scholar who was also past commissioner with the United States Commission on International Religious Freedom.
Religious faith and practice are cornerstones of the American experience. It’s worth recalling that James Madison, John Adams, Charles Carroll, John Jay, George Washington, Alexander Hamilton, Benjamin Franklin, Thomas Jefferson—in fact, nearly all the American Founders—saw religious faith as vital to the life of a free people. They believed that liberty and happiness grow organically out of virtue. And virtue needs grounding in religious faith.
Freedom of religion is more than freedom of worship. The right to worship is a necessary but not a sufficient part of religious liberty. For most religious believers, and certainly for Christians, faith requires community. It begins in worship, but it also demands preaching, teaching, and service; in other words, active engagement with society. Faith is always personal but never private. And it involves more than prayer at home and Mass on Sunday—although these things are vitally important. Real faith always bears fruit in public witness and public action. Otherwise it’s just empty words.
Threats against religious freedom in our country are not imaginary or overstated. They’re happening right now. They’re immediate, serious, and real. Last year religious liberty advocates won a significant and appropriate Supreme Court victory in the 9-0 Hosanna-Tabor v. EEOC decision. But what was stunning even to the justices in that case was the disregard for traditional constitutional understandings of religious freedom shown by the government’s arguments against the Lutheran church and school.
From the beginning, believers—alone and in communities—have shaped American history simply by trying to live their faith in the world. We need to realize that America’s founding documents assume an implicitly religious anthropology—an idea of human nature, nature’s God, and natural rights—that many of our leaders no longer really share.
Charles J. Chaput, a Capuchin Franciscan, is the archbishop of Philadelphia and the author of Render Unto Caesar.