Save yourself like a gazelle from the hand of the hunter, alike a bird from the hand of the fowler.  Go to the ant, O sluggard; consider her ways, and be wise.  Without having any chief, officer, or ruler, she prepares her bread in summer and gathers her food in harvest.  How long will you lie there, O sluggard?  When will you arise from your sleep?  A little sleep, a little slumber, a little folding of the hands to rest, and poverty will come upon you like a robber, and want like an armed man (Prov 6:5-11 ESV). 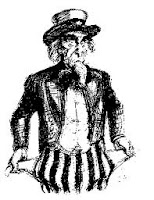 I received my weekly 'Cabot Wealth Advisory' today that looked at the end of quantitative easing, the likelihood of higher interest rates, and an uncertain future.  I am not a fear monger but I am surprised we are not in a worse economic situation than we currently find ourselves in and I do not see things getting better any time soon.  This newsletter reinforces some of my concerns.  Here is a summary.

According to the U.S. Debt Clock (http://www.usdebtclock.org), one of the most widely cited tools to measure our nation's ballooning debt load, the U.S. government owes $14.3 trillion to our creditors.  That's nearly $130,000 per taxpayer.  In addition, according to the Federal Budget released by President Obama in mid-February, we're currently on pace to add $1.65 trillion to our national debt this year alone!

The Federal Reserve's ginormous quantitative easing program (QE) ended a couple of weeks ago.  This has effectively taken away major support from the Treasury market.  Not only that, the  financial problems in Europe are coming to a head and there is still a sluggish economic outlook. What will happen?  Many, if not most are predicting higher interest rates.  There is one other country in recent history that has attempted to bolster their economy with QE.  Japan introduced QE in 2001 and ended the program in March of 2006.  The country was able to flood the markets with liquidity and thereby keeping interest rates low, just as the Federal Reserve has done here.  But that was only as the program was in place.  When the cash flow stopped their stock market took a steep correction.  See the chart below: 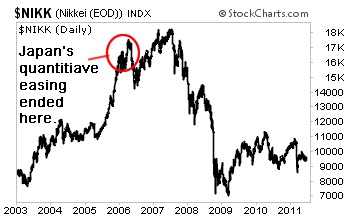 Notice that it turned sharply lower, then rebounded in the short term only to fall again and has not since recovered and five years later is 40% lower!  I am not predicting that what happened in Japan will happen here.  I am no economist but it does make me nervous.  Consider the ant . . .