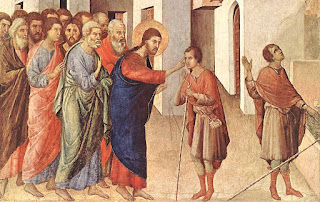 And as they went out of Jericho, a great crowd followed him.  And behold, there were two blind men sitting by the roadside, and when they heard that Jesus was passing by, they cried out, “Lord, have mercy on us, Son of David!” The crowd rebuked them, telling them to be silent, but they cried out all the more, “Lord, have mercy on us, Son of David!” And stopping, Jesus called them and said, “What do you want me to do for you?” They said to him, “Lord, let our eyes be opened.”  And Jesus in pity touched their eyes, and immediately they recovered their sight and followed him.  Mat 20:29-34 ESV


I was struck by this passage in my morning reading.  First, Jesus is not enamored by the crowds but stops to help the seemingly insignificant, the two blind men.  The crowds rebuked the blind men for interrupting Jesus but Jesus ministered to them.  Those whom the crowds reject Jesus heals!  Are you enamored with the crowds yet bothered by the insignificant and problem people in your life?

The two blind men call Jesus, Lord and Son of David.  They refer to him with Messianic titles because they recognized he was the Messiah and looked for him to alleviate their suffering, they trusted him.  While many of the common and ignorant folk recognized Jesus as the Messiah, most of the religious leaders outright rejected him to the end.  Though the former may have misunderstood his Messianic mission, like most of us, they still saw him as the Messiah.

Finally, when they were healed they followed him, they became his disciples.  What a great ending!  He let his schedule be interrupted by those who bothered the crowds, alleviated their suffering, and in the end, they became his disciples.  The whole event had one great goal, to fulfill his mission.  Maybe I need to learn something from this story?
Posted by AK Pastor Blog at 8:56 AM