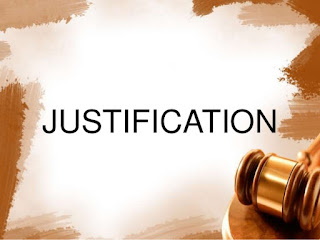 Theologian Michael Horton has a new two volume work on Justification. They are available on Amazon. There are massive but worth the effort to read about a thousand pages. I just read an interview with Horton on Books at a Glance about them here. Here are a couple of gems from the interview.
On Justification – that in this marriage between Christ and us, there’s a great exchange of our rags for his riches; he becomes poor so that we may become rich; he becomes a sinner so that we may become justified; he becomes the most unholy thing in the universe so that we can be the very righteousness of God.

There are basically two trajectories or trends in the later Middle Ages. You could have Augustinians who are also modern, the via Augustini moderna, but the via moderna, the modern way, was more often associated with the nominalists. And the nominalists were, for the most part, Pelagian or semi-Pelagian. That is, they either believed that God’s grace wasn’t necessary at all, or they believed that God’s grace was something he gave after you, by your own free will, took the first step. You take the first step, repenting and believing in Christ and then he gives you grace for the rest of the way.

Other people, and I place myself in this camp, say that union with Christ is an umbrella term for all of the benefits that we have in Christ. We are chosen in him, redeemed in him, called effectually to union with him; where we receive, through faith, which is a gift, we receive justification, sanctification and glorification. But within that union that we have in Christ, sanctification can only come about, the process of being made new, being conformed to the image of Christ, can only come about on the basis of God’s verdict that we are declared righteous only for the sake of Christ. Think of adoption or marriage, analogies, of course, that the Bible itself uses for all this. First, you have to be legally married before you can sleep together and have a proper relationship in marriage. Before you go home and become part of the family, you have to be legally adopted. And so, justification really is the legal ground that gives us security and certainty. When we are justified, we can go home rejoicing, knowing that nothing can ever separate us from the love of our Father in Jesus Christ. We can grow in our marriage, our union with Christ more and more each day knowing that we can never be severed from his body. Why? Because Romans 5:1, having been justified through faith we have peace with God.

There’s no middle ground here. Well, the middle ground is precisely what the medieval church occupied. We are saved by grace, but we are also saved by our cooperation with that grace. Justification is that cooperation with grace. The reformers said, look at these passages, not just in Paul, but in the Gospels. Not only in the New Testament, but in the Old Testament. There’s nothing we can do. We can’t make the first move to God; he has to regenerate us; and he has to declare us righteous; we can’t make ourselves righteous. How much can you cooperate with grace in order to be justified? The Scriptures teach that we are justified, and therefore, we cooperate with God’s grace. It doesn’t tell us that we are justified by cooperating with God’s grace. What was Abraham doing in Genesis 15, when he believed God and was justified? He believed the promise and right then and there, hashab is the Hebrew word, he was justified, then and there. What does that mean? Well, Paul tells us what that means in Romans 4, and elsewhere. So, really, it was coming back to the Scriptures. When we come back to the Scriptures and see how they contrast the helpless condition of fallen human beings with the all-sufficient grace and power and mercy of God in Jesus Christ that we really understand the Gospel.

The only way you can be right with God is to come with your sins; to come with your doubts; to come with your despair; to come to him just as you are, as we sing, without one plea, except that Christ died for you and was raised for you. Think of the contrast that Jesus draws between the tax collector and the Pharisee. The Pharisee looks over at the tax collector and says, I thank you God that I am not like one of those guys. Notice, he wasn’t saying, what a great guy I am, I did it all by myself. He’s not a Pelagian, he’s not denying God’s grace. He says, I thank you God that I am not like this person over here. And then he goes on to list all the ways that he cooperates with God’s grace. But the tax collector can’t even lift his eyes up to heaven. Imagine this guy probably swindled old ladies out of their estates, and he can’t even raise his eyes to heaven. And he cries out, Lord, be merciful to me, a sinner. And Jesus says that man went home that day justified, rather than the other.