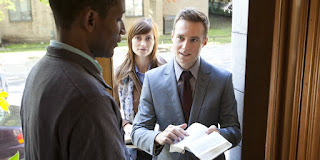 From Justin Taylor at TGC . . .
The following is a brief overview of what Jehovah’s Witnesses believe, along with what the Bible really teaches, printed among the many articles and resources in the back of the ESV Study Bible (posted by permission).

Jehovah’s Witnesses believe that God’s one true name—the name by which he must be identified—is Jehovah.
Biblically, however, God is identified by many names, including:
In NT times, Jesus referred to God as “Father” (Gk. Patēr; Matt. 6:9), as did the apostles (1 Cor. 1:3).

Jehovah’s Witnesses believe that the Trinity is unbiblical because the word is not in the Bible and because the Bible emphasizes that there is one God.
Biblically, while it is true that there is only one God (Isa. 44:6; 45:18; 46:9; John 5:44; 1 Cor. 8:4; James 2:19), it is also true that three persons are called God in Scripture:
Each of these three possesses the attributes of deity—including
Still further, each of the three is involved in doing the works of deity—such as creating the universe:
The Bible indicates that there is three-in-oneness in the godhead (Matt. 28:19; cf. 2 Cor. 13:14).
Thus doctrinal support for the Trinity is compellingly strong.

Jehovah’s Witnesses believe that Jesus was resurrected spiritually from the dead, but not physically.
Biblically, however, the resurrected Jesus asserted that he was not merely a spirit but had a flesh-and-bone body (Luke 24:39; cf. John 2:19-21).
He ate food on several occasions, thereby proving that he had a genuine physical body after the resurrection (Luke 24:30, 42-43; John 21:12-13).
This was confirmed by his followers who physically touched him (Matt. 28:9; John 20:17).

Jehovah’s Witnesses believe that the second coming was an invisible, spiritual event that occurred in the year 1914.
Biblically, however, the yet-future second coming will be physical, visible (Acts 1:9-11; cf. Titus 2:13), and will be accompanied by visible cosmic disturbances (Matt. 24:29-30). Every eye will see him (Rev. 1:7).

Jehovah’s Witnesses believe that the Holy Spirit is an impersonal force of God and not a distinct person.
Biblically, however, the Holy Spirit has the three primary attributes of personality:
Moreover, personal pronouns are used of him (Acts 13:2). Also, he does things that only a person can do, including:
The Holy Spirit is the third person of the Trinity (Matt. 28:19).

Jehovah’s Witnesses believe that salvation requires faith in Christ, association with God’s organization (i.e., their religion), and obedience to its rules.
Biblically, however, viewing obedience to rules as a requirement for salvation nullifies the gospel (Gal. 2:16-21; Col. 2:20-23). Salvation is based wholly on God’s unmerited favor (grace), not on the believer’s performance.
Good works are the fruit or result, not the basis, of salvation (Eph. 2:8-10; Titus 3:4-8).

Jehovah’s Witnesses believe hell is not a place of eternal suffering but is rather the common grave of humankind. The wicked are annihilated—snuffed out of conscious existence forever.
Biblically, however, hell is a real place of conscious, eternal suffering (Matt. 5:22; 25:41, 46; Jude 7; Rev. 14:11; 20:10, 14).

A couple of additional resources you may find helpful:
Posted by AK Pastor Blog at 10:09 AM