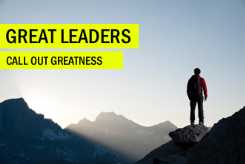 I read this on Sermon Central today -
Leaders: Don’t apologize for expecting excellence. God deserves it, and people are capable of it. Call it out.
The impetus for it came from my observation that some leaders are afraid or embarrassed to expect excellence as a normal product from the people they lead. Usually it’s because they don’t want to appear to be demanding or demeaning. Apparently it’s an affront to expect a lot out of a person.
But it’s actually just the opposite. It honors them.
The highest compliment you can give to those you lead is to demand the best from them. Low standards do not communicate appreciation. They communicate contempt for someone’s ability and potential. Once you have stopped challenging someone to do more, you have stopped believing in them. And you have effectively stunted their ability to grow in their God-given gifts and calling.
It’s the responsibility of the leader not only to cast vision, but also to make sure that those serving under the vision are maximizing their gifts in support of it. An indispensable tool that every leader must learn to develop, then, is the ability to speak life into potential. Call it out. And the best way to call it out is by maintaining a high standard. People don’t grow by being allowed to live in mediocrity.
So, leaders: Don’t apologize for expecting excellence. God deserves it, and people are capable of it. Call it out.
You’re not being demeaning by holding your people to a high standard. The real affront would be to allow someone to work at a level that doesn’t correspond to the potential for greatness that God has put in them.
Posted by AK Pastor Blog at 8:58 AM