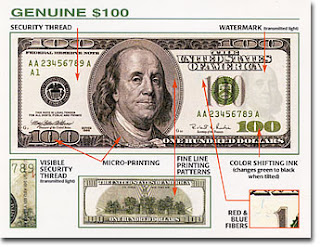 Yesterday I was informed that there are counterfeit $20 bills that are floating around Homer since the beginning of the year.  The unsuspecting victims were deceived because they did not recognize the bills as counterfeits.  I was told that real $20 bills will have a face in the watermark along one side edge when you hold it in the light and secondly that Andrew Jackson’s coat will be textured.  So last night Karen and I were at dinner with another couple and as I shared this with them Karen said that she had heard that banks have tellers handle bills so much in training that the teller can identify a fake by the touch and the feel of it.  I decided to find out for myself how to distinguish the real thing from a fake so I did a little research this morning.  I found that the way to identify a fake is to compare it to a real bill of the same denomination.  Several sites gave a list of identifying markers that are easy to see on real bills but are not on counterfeit ones.  For example, compare the print quality and texture and the watermark as I was told.  But I also found several other factors to examine.  For more information go here.

The second principle is that individuals, some you may know, were deceived because they were not aware that counterfeit bills were circulating around in Homer nor did they even suspect the fact that they could be deceived!

Let’s make this more personal.  How well do you know God and his word?  Do you know him and his word so well that the instance some idol raises its ugly head in your heart that you instantly know it?  For instance, when you are being selfish do you recognize the idol of self as at work in your heart?  Or when you are afraid to share the gospel or tell the truth in a situation that the idol of people pleasing is at work in your heart.  I could go on and on . . .

Let me encourage you to make this year the year that you saturate yourself with God and his word so that your mind is renewed in such a way that you are better equipped to know God and his truth.

Fighting against the idols in my own heart,